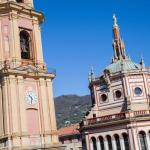 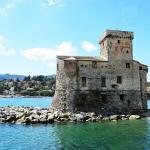 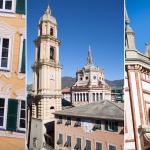 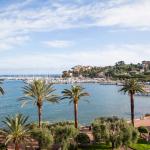 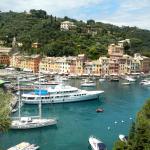 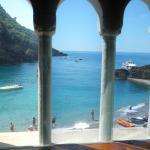 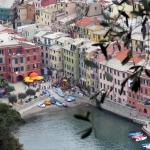 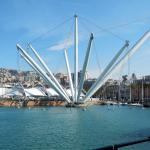 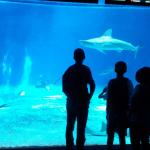 Above ...
In order to appreciate the natural beauty from above, a comfortable cableway connects in just 8 minutes Rapallo to Montallegro sanctuary, offering an unforgettable excursion and the opportunity to dominate extraordinary beauties

By land ...
Trails traced in the promontory of Portofino - a nature treasure - allow to choose beautiful itineraries of varying duration and difficulty. We recommend from Portofino to S.Fruttuoso 2 hours in the regional park among chestnut woods and olive groves with suggestive sea landscapes.

By sea....
A well-equipped fleet of boats will take you shortly to discover a corner of paradise. From the promontory of Portofino, one of the most famous parks of Italy with its beauties and colors, to the wonders of S. Fruttuoso Bay, its backdrops and the Christ of the Abyss. With more time you can also reach the Cinque Terre and Portovenere.

Passo della Crocetta
1st Sunday of May
Liturgical celebration recalling the "Finding of the Holy Cross" by Sant'Elena.
Holy Mass, in the church of 1933, ceremony of the "Blessing of the Two Valleys", gastronomic stands.

San Pietro di Novella
June 29th
On the occasion of the Patronal Festival, there are important festivities including a solemn procession from the church of the same name (XVI sec.) with the statue of St. Peter and many Crocefissi.
Dances, fireworks and gourmet stands.

Nostra Signora di Montallegro
1-2-3 July
Rapallo's patronal festival takes place for three days every year on the 1st, 2nd and 3rd of July (regardless of the days of the week), a festival that involves the whole city for more than three official days and attracts thousands of tourists to the famous "Palio Pirotecnico", with magnificent nighttime and daytime fireworks on the sea with unique features in the world.

Sant'Andrea di Foggia
July 16th
The Patronal Feast is dedicated to the Madonna del Carmine.
Religious celebrations in the parish church (various restorations since 1582) and the procession of the "Crocefissi" with country dances, gourmet stands, fireworks.

Sant'Anna
July 26th
In the three days preceding the 26th of July, date of the Patronal Feast in the homonymous church of 1629, gastronomic stands are set up, cultural, theatrical and musical events.

San Quirico d'Assereto
Last Sunday of July
Patronal Feast. The statues of San Quirico and Santa Giuditta are brought to the procession by the parish church (whose current structure is attributed to the XVII century).
Then fireworks, gastronomic stands with music and dances.

Costaguta
1st Saturday and Sunday of August
In the church of 1935 dedicated to the Saints Gervasio and Protasio: religious ceremonies, gastronomic stands, dances and fireworks

San Martino di Noceto
First Sunday of August
Celebration of the Saint called Sant'Innocenzo Martire in the parish church dating back to 1089 and after various restorations extended in 1775.
In addition to the Procession, the festival features gourmet stands and a two-year exhibition of precious laces.

Santa Maria del Campo
15th August
Patronal Day dedicated to Santa Maria Assunta as the parish church that dates back to the 17th century.
Solemn ceremony at 11 am and in the evening the traditional procession.
In the three days before August 15th, in the "Campo Sportivo" is organized the "Summer Festival" with typical gastronomy, dancing, games and fireworks.

Chignero
August 16th
Patronal Day dedicated to St. Rocco in the church of the same name of 1632, with exclusively religious rites.

San Massimo
20th August
Patronal Feast in honor of San Massimo in the church of the same name of the seventeenth century, with three days of celebrations.
Solemn procession of the statue of the saint, gourmet stands, dances, fireworks.

San Bartolomeo
24th August
In the church dedicated to St. Bartholomew before the 1600s, there are three celebrations: April 29th, December 1st and the night of December 24th. The August 24th festival consists of gourmet stands, dances and charity.

Sant'Agostino
27th and 28th August
The celebrations in honor of Sant'Agostino are divided into two days, with gastronomic stands, charity, fireworks culminating with the procession of the statue of the saint for the main streets. .

Caravaggio
1st Sunday of June and last Sunday of September
Among the festivals dedicated to the Madonna of Caravaggio on Mount Orsena, the main falls on the second Sunday of June with the celebration of some Messe in the homonymous sanctuary (rebuilt several times) reachable on foot or by helicopter; on the square of the church are prepared the traditional hot focacce. .

Montepegli
2nd Sunday of September
The Church of Montepegli (inaugurated in 1912) is dedicated to the Sacred Heart of Jesus.
At the solemn procession for the streets of the resort: fireworks, local gastronomy stand and charity events.

San Maurizio di Monti
Sunday, September 24th
The parish church of San Maurizio dates back to around 1100 and enlarged around 1600.
On the occasion of the patron celebration a solemn procession is celebrated followed by fireworks.

San Michele di Pagana
Last Sunday of September
The parish church dedicated to San Michele Arcangelo dates back to 1113.
During the celebrations, St. Michael's statue is brought to the streets of the village in solemn procession.
Then fireworks, local gourmet with traditional fried tortelli.
In addition, the last race of the Tigullio marine palio is also being played these days.